Flatlanders go to the mountains 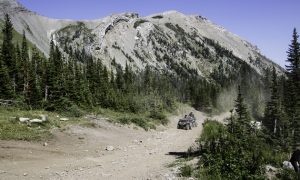 Members of the Queen City Quadders from Regina, Saskatchewan, revel in the beauty of the Castle area.— photo courtesy John Meed

In August of 2016, the Crowsnest Pass Quad Squad, the local ATV club in the area, hosted several members of the Queen City Quadders (QCQ; Regina, Saskatchewan, area ATV club) for a week of riding in the Castle area. For the flatlanders, this was an amazing adventure, and for most, it was their first experience with mountain riding.

The scenery was breathtaking, the riding challenging and the experience memorable. QCQ members were impressed with the work and dedication of the Quad Squad and the time, money and effort their members had put in managing and grooming the trails. The Quad Squad were excellent hosts and guides.

Exploring the area offered several opportunities to view the splendour that is the Canadian Rocky Mountains, as well as the famous Frank Slide, the site of a plane mishap and an abandoned mining town, to mention a few. QCQ members took the opportunity to get off their ATVs and several went to nearby attractions, such as Waterton National Park.

Unfortunately, in recent developments, the Alberta Government has proposed a complete ban on ATVs in the Castle Provincial Park and Wildlands, which could mean that ATV riders will no longer legally be able to experience this amazing venue. The Quad Squad, along with Alberta Off Highway Vehicle Association (AOHVA) and other support groups and interested parties have mounted a campaign to convince the government of compromises that would allow ATV riders the opportunity to still ride on the already developed ATV trail system. 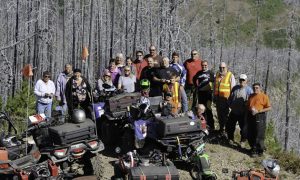 Clubs provide a unified voice to deal with situations that arise, such as proposed area closures.— photo courtesy John Meed

This is a classic example of how quickly situations or access rights can change for ATV users and where clubs and associations can be vital in providing a unified voice when dealing with governments and other decision-makers.

We hope the Alberta Government listens to the Quad Squad, AOHVA and those who want to continue to have this fantastic riding opportunity available to ATV riders in the future.