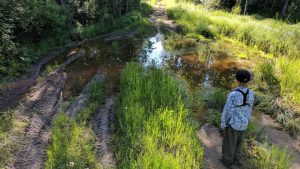 The Wilderness Committee is calling on Manitoba to ban the use of all-terrain vehicles within provincial parks.

Conservation officers are not enforcing existing rules governing where motorized vehicles can go inside parks, he said. As a result, ATVs are creating mudholes in soft terrain and then compounding the damage by driving into the forest to avoid the pits, he said.

Dirt bikes, meanwhile, are polluting the wilderness with noise, he said.

“Recreational ripping around is not necessary inside a provincial park. There’s a lot of public land, there’s a lot of private land those things can be happening on, but we can’t do that in a park because it’s too much destruction, it’s too much disturbance for an area we need to be protecting,” Reder said Friday in an interview.

“There’s huge wetlands that are being torn up just this year because of all-terrain vehicle traffic, so the government isn’t controlling this. The mandate to control this has to come from the minister’s office. They’ve had this file for years and years and we still haven’t seen any action on it.”

Reder said he took his concerns to the province — and the government confirmed they’ve heard his concerns.

“The province works to achieve a balance between the protection of our parks, while allowing Manitobans certain recreational opportunities, including regulated use of ATVs,” provincial spokesperson Glen Cassie said in a statement.

“Trails are clearly marked and conservation officers enforce rules around access in our parks.”

With files from Leif Larsen and Trevor DineenReport Typo