In defence of the Castle 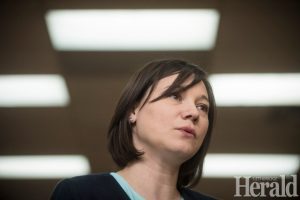 © Lethbridge Herald photo by Tijana Martin Shannon Phillips,  Minster of Environment and Parks speaks to the media on Friday to help clear up some misconceptions in relation to the Castle Provincial Park and Castle Wildland Provincial Park Draft Management Plan. @TMartinHerald

J.W. Schnarr
Lethbridge Herald
jwschnarr@lethbridgeherald.com
Misinformation surrounding Off Highway Vehicle use in the Castle parks area is undermining the process of “authentic dialogue” between user groups, says the provincial environment minister.
Shannon Phillips said the development of the Castle parks areas has been overshadowed by “disrespectful” language, and that there have been a number of false statements and misinformation spread regarding the issue.
“The fact of the matter is that the previous government recommended in the Porcupine Hills and in the Livingstone recreation area, that there be recreation management planning,” she said.
“The fact is also that the previous government didn’t get around to it.”
Phillips said her government continues to engage OHV users to ensure proper supports are put in place to make sure “high quality” OHV experiences are available to user groups. But, she says, the process is still ongoing.
“I want to be clear right now. The decisions haven’t been made. The plan that is before us is a draft.”
Phillips said the draft was created through consultation with technical working groups who examined the science around recovering the fishery, the wildlife habitat, and ensuring the water supply is in working order.
“That science informed our recommendation that there be a staged, phase-out of OHV use that is causing a great deal of erosion and a great deal of habitat loss in particular for our trout fishery,” she said.
“And a phasing in, in an appropriate way, with the right staging points, the right bridges, and trail networks in places where it is more compatible, and it has less of an impact. I don’t know how the previous governments made decisions, but in our world, a draft means exactly that.”
A number of groups have already engaged the government on the issue, according to Phillips, who said respectful dialogue and participation in the process is more effective than other means of letting the government know their wishes.
“All of them have made really interesting contributions,” she said. “They’ve really taken this on as a draft, and they are very likely to see their input reflected in the final management plan.”
Phillips said the original working groups that contributed to the draft were intended to reflect the variety of interests involved. Municipalities were sought out for representation as well as ranchers and landowners.
“They are the ones who often have to end up footing the bill for much of the activity that goes on in the landscape,” she said.
She said ranchers in particular have suffered from irresponsible OHV use because the activity interferes with their ability to make a living.
“All of those voices were recognized and included around the table,” she said. “As was small business.”
At a recent OHV rally in Lethbridge, Wildrose leader Brian Jean described the decision to phase out OHV use as something that would negatively impact people’s  jobs, their traditions, and their way of life.
Phillips described that kind of talk as inflammatory and unhelpful.
“I would also reject his assessment,” she said. “If he had been out talking to the ranchers I have talked to, and the municipalities I have talked to, he would have a different view of this. It is very clear he has not done that.”
Follow @JWSchnarrHerald on Twitter