Dave LeeAugust 19, 20170 commentsATVMB
As we all know, ORV riding has become a significant leisure time activity for families across Canada. In Manitoba alone, the ORV industry is estimated to generate over $250 million per year. Enjoying the outdoors on an ORV has always required access to public lands. Across the country, vast trail systems have been developed, and in Manitoba our member clubs have been working hard in conjunction with ATVMB, the provincial government and various stakeholders – with to date limited funds – to create new trails in Manitoba, which is growing each year as new opportunities become available. Managed trails have proven to provide safety for riders while reducing environmental impact, thus it is essential that public land remain acessible for all Manitobans to enjoy. 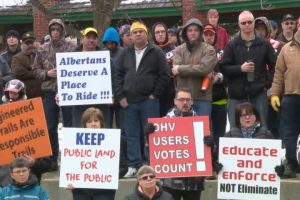 It is with a measure of disapointment we continue to hear about the continued targeting of ORV users in Alberta by Alberta’s provincial NDP government, who appear to be attempting to enact one of the largest land use changes in the province’s history. Part of the focus is on the Castle region, which encompasses an area of over 103,000 hectares which is banned to ORV users. Alberta’s Environment Minister Shannon Phillips even went so far as to indicate those those who oppose the ban are “the radical far right” in an article in the Calgary Herald on July 27th: http://calgaryherald.com/news/local-news/province-announces-184-new-campsites-as-part-of-castle-parks-upgrade.

ATVMB strongly opposes the Minister’s identity politics. ORV riding is not a political issue, it is a recognized, long-standing form of recreation that is enjoyed by people from all walks of life. From nurses to teachers to farmers and more, ORV riding is enjoyed by Canadians and their families on a daily basis. Below is a link to the newsletter from AOHVA decribing the ongoing efforts of the tens of thousands of ORV riders in Alberta who respect and want to continue to maintain a comprehensive trail management strategy to ensure public land remains open to all user groups.