Recent rain and improving weather conditions have allowed the province to lift travel restrictions in the eastern, central and western regions of the province with the exception of the Duck Mountains.  Motorized backcountry travel is not allowed between 10 a.m. and 8 p.m., and campfires are only allowed between 8 p.m. and 8 a.m. in the Duck Mountains.  Provincial resources including Manitoba Sustainable Development, Emergency Measures Organization and the Office of the Fire Commissioner continue to work on a number of fires around the province.  Ontario has provided 120 firefighters and Quebec has sent four water bombers.

The fires near the community of Ashern are considered under control, with crews remaining in the area to monitor and address a few hot spots.

Recent rain and high humidity assisted suppression efforts on fires near the community of Sapotaweyak Cree Nation but the community remains evacuated.

One new fire started yesterday and the total number of fires in Manitoba to date is 186, well above the 20-year average of 114 for this date.

A list of parks with campfire restrictions can be found at www.manitobaparks.com.  Visitors to provincial parks should check with park staff for the most up-to-date information.

For additional information on these restrictions, contact the nearest Manitoba Sustainable Development office.  To report a wildfire, call 911 or the T.I.P. line (toll-free) at 1-800-782-0076.

Please exercise caution when in or near forested areas. If using an ATV in areas where backcountry travel is permitted, please remember to stay on developed trails, stop frequently to check areas around the engine and exhaust for debris and carefully dispose of any debris found. A small shovel, axe, and fire extinguisher should be carried with your ATV at all times.

Open fires are prohibited from April 1 to November 15 annually, except under a burning permit or in enclosed, approved fire pits such as grated campfire pits in provincial campsites where permitted. Activities in wooded areas involving fireworks or sky lanterns may also require written authorization during this time period in certain areas.

A list of local Manitoba Sustainable Development offices is available at www.gov.mb.ca/sd/wildlife/about/who.html

Please report all wildfires to 1-800-782-0076 (TIPS / Wildfires) Please note the TIP line is only for reporting wildfires and not for general information).

Manitoba Sustainable Development and the Office of the Fire Commissioner advise hot and dry conditions have elevated the wildfire danger levels in many areas of the province heading into the August long weekend.

Manitobans are reminded to exercise extreme caution with any outdoor activities. In areas where ATV use is authorized, stay on developed trails, stop frequently to check areas around the engine and exhaust for debris and carefully dispose of any debris found. Riders should carry a small shovel, axe and fire extinguisher at all times.

No open burning is allowed without a permit between April 1 and Nov. 15. For information on permits and restrictions, Manitobans can contact their local Sustainable Development office. Municipalities often implement their own restrictions, so individuals should also check with local municipal offices for further information.

Anyone planning a backcountry trip is reminded campfires should only be made in designated fire pits, however a better option is to prepare meals on a light weight portable cook stove. Campers heading into a remote area should tell someone else where they are going and when they expect to return, checking in upon return or if plans change.

To report a wildfire, contact local emergency services at 911 or the forest fire tip line at 1-800-782-0076 (toll-free). More information on wildfire prevention is available at www.gov.mb.ca/wildfire/.

The Reeve of Ste.Anne says they are being proactive as things start to dry.

Art Bergmann notes the municipality has issued a fire ban, effective immediately. That means no burning trash or grass.

“There was opportunity in the last few weeks to do it with care,” notes Bergmann. “But now we are asking people that they refrain from burning trash and grass and so forth around their yards.”

However, he says they will allow backyard fires in an enclosed pit as long as it is completely doused once you are done with it.

Bergmann says even though their fire trucks are not being called out to grass fires, the municipality is trying to be proactive. He notes they will remove the ban once things turn green. 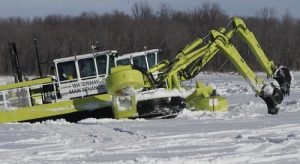 Safety notices have been posted in areas where the Amphibex machines will be working as a reminder for ice fishers, snowmobilers and other river users.  Ice fishers should remove huts or other material in the areas covered by the ice-mitigation program.  Hikers and outdoor enthusiasts are advised to stay off the ice where notices are posted or where recent ice cutting is apparent.

The ice-jam mitigation program focuses on sections of the north Red River with a history of ice-jam related flooding.  The equipment is operated and maintained by North Red Waterway Maintenance Inc., a corporation formed by the rural municipalities of St. Andrews, St. Clements and the City of Selkirk.  The Amphibex fleet crushes more than 25 kilometres of river ice annually.